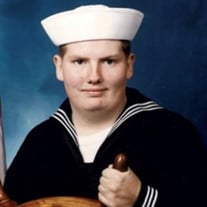 William McDaniel “Mack” Buttram (aka Bulldog) passed away on October 20, 2018, at the age of 51. He was preceded in death by his parents, Robert Corry Buttram and Helen Nancy Stricklin Buttram, and two half-sisters, Ann Lyons and Dinah Kay Tapper. He leaves behind his sister, Ranee Mitchell, and her husband, Leslie, and their children, Ryan Lindley, Jessie Lindley (Dante Smith), and Jacob Mitchell, all of Florence; his half-sister, Margie Lyn Frasier, of Nampa, ID; his aunts Bonnie Ward and Doris (Rayvee) Harbison, of Gardendale, AL; many other family members and so many friends. Mack was born on January 8, 1967, and spent his childhood growing up at Camp Maxwell. He was an Eagle Scout and continued to be involved in scouting as Assistant Scout Master for Troop 84 in Haleyville until his death. He graduated from Haleyville High School in 1985 and joined the Navy where he served aboard the USS Saratoga. He worked in many areas after his time in the Navy but was especially proud of his time as an EMT. He was a Master Mason in the Gardendale Masonic Lodge and a member of the American Legion. The fact that he could talk the ears off a jackrabbit led him to become a ham radio operator with the call sign “KG4WHW,” and he was a member of the Blount County Amateur Radio Club. Mack loved telling ridiculously corny jokes, going out to eat with his friends and family, camping, Auburn football, Native American history, and serving in his church. There will be a Masonic graveside service at Maxwell Chapel in Haleyville on Saturday, October 27, at 11:00 a.m. with Stan Galloway and Corry Buttram officiating. A service celebrating Mack’s life will be at GracePoint Church in Mount Olive Sunday, October 28, at 1:30 p.m. with Mac Buttram officiating and Marshall Graham and Steve Gray sharing “Mack Moments.” Visitation is at 12:30 p.m. Even with his physical disabilities that were caused by diabetes, Mack continued to be a positive, joyful person. When anyone asked how he was doing he would say, “If I was any better there would be ten more of me!” He had a big heart and loved to make people laugh. The family is so grateful to GracePoint Church, Talladega Bible Methodist Church, Maxwell Chapel, Alabama Institute for the Deaf & Blind, and countless individuals who were a blessing to Mack over the years. In lieu of flowers, please consider donating to the food pantry at GracePoint Church, 2451 Mt Olive Rd., Mt Olive, AL 35117.

William McDaniel &#8220;Mack&#8221; Buttram (aka Bulldog) passed away on October 20, 2018, at the age of 51. He was preceded in death by his parents, Robert Corry Buttram and Helen Nancy Stricklin Buttram, and two half-sisters, Ann Lyons and... View Obituary & Service Information

The family of William McDaniel Buttram created this Life Tributes page to make it easy to share your memories.

William McDaniel “Mack” Buttram (aka Bulldog) passed away on...

Send flowers to the Buttram family.