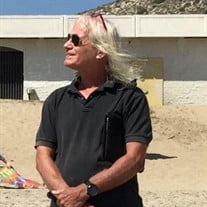 William Kerry Parrish, Jr., affectionately known as Bill, was born November 12, 1952 in Glendale, California to parents William and Madeline Parrish. He was raised in Burbank, California where he developed a love for surfing and played football at the local high school. On December 25, 1983, he married the love of his life, Rosa. After moving around to different cities and states leaving his unique impression wherever he went, he settled in Birmingham, Alabama where he spent out his last years. On February 27, 2019, Bill went to be with the Lord. He was surrounded by the love of his family and friends. Bill was the simplest, most complicated man. He was always ten feet tall, and yet his humbleness drew people from all walks of life into his circle. Although his talents in life were nothing short of genius, it was the simplicity of them that awed and turned heads wherever he went. To all the people and work in his life that he touched, he handled with the same class, love, and affection that he did with those he held most dearly. Even the earth, plants, and trees appreciated him, and thrived under his care, when he touched them. He leaves those to cherish in his memories: his wife of 35 years, Rosa; sons, Carlos, William III, Caleb, and Joshua; daughter, Michaela; devoted daughters-in-law, Sophia and Amanda; grandchildren, Giovanni, Gina, Genevieve, Giana, GianCarlo, Maya, Linda, and Lorrainne; and a host of other relatives and friends. Visitation will be Saturday, March 2, 2019 from 11:00 a.m. until 1:00 p.m. at The New Gardendale Funeral Home. A Celebration of Life Service will follow at 1:00 p.m. in the chapel of the funeral home.

William Kerry Parrish, Jr., affectionately known as Bill, was born November 12, 1952 in Glendale, California to parents William and Madeline Parrish. He was raised in Burbank, California where he developed a love for surfing and played football... View Obituary & Service Information

The family of William “Bill” Kerry Parrish Jr. created this Life Tributes page to make it easy to share your memories.

Send flowers to the Parrish family.