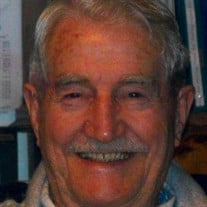 Wiley Samuel Krotzer Sr. 12/25/1930 - 02/25/2021 With heavy hearts we announce our beloved father, husband, and grandfather, Wiley Samuel Krotzer Sr., was called to his Heavenly Home, February 25, 2021. Born December 25, 1930 to Roy Hunt and Rosanna Krotzer in Parrish Alabama. Wiley grew up in Parrish (Walker County) and graduated from Parrish High School Class of 1949. He served in the Army during the Korean War. He married Janie Carolyn Manasco May 26, 1951. Wiley and Carolyn moved to Gardendale early in their marriage, raised 3 children and remained residents until their deaths. Wiley earned an Associate degree in Electronics from UAB. He worked for Hayes Aircraft and was assigned to their NASA contract working on several early space programs including the Gemini and Saturn V and later with their X-Ray department. Having a special talent and love for “fixing and building things”, especially Volkswagens, he and his brother, Morris, owned and operated Krotzer Brothers Inc Foreign Car Repair. One hobby of his was wood working, specifically building furniture. Wiley was a life-long member of Pineywood Baptist Church where he maintained the facility, taught Sunday School, was a member of the Choir, worked in various capacities for Vacation Bible School and served as a Deacon. He also volunteered at the North Jefferson Food Bank. He was known as the go to guy if you needed anything fixed or built, Mr. Krotzer could figure out a way. If he wasn’t at home he was “at the church”. While we are saddened that he is no longer with us here on earth, we rejoice and are comforted knowing he is safe with Our Heavenly Father having a wonderful reunion with so many that made the journey before him. We will meet again in the sweet bye and bye. Wiley was preceded in death by his parents, his devoted and loving wife of 58 years Janie Carolyn Krotzer; 3 brothers: Will Ray and James Wakefield, Roy Krotzer; 2 Sisters: Trannie Burrow and Mary O’Berry; Granddaughter: Jessica McCain Survivors include his loving wife for the last 8 years Joyce Ann Stell Krotzer; Son Sam Krotzer (Karen), daughters Vikki Reimer (Ken) and JeLinda McCain (Brent); 5 Grandchildren: Brandon McCain, Kate and Amy Krotzer, Blake and Sarah Reimer; 2 Great Grandchildren: Mikayla and Caroline McCain; 1 Brother: Morris Krotzer A Celebration of his life will be held at 2:00 pm on Wednesday March 03, 2021 from the chapel at Gardendale Heritage Funeral Home with the family to receive friends one hour prior to the service. A graveside service will follow at Oakwood Memorial Gardens. Rev. Harold Rhodes will officiate the services. In leu of flowers family suggest donations be made to pancreatic cancer research or to your favorite charity.

The family of Mr. Wiley S. Krotzer Sr. created this Life Tributes page to make it easy to share your memories.

Send flowers to the Krotzer family.