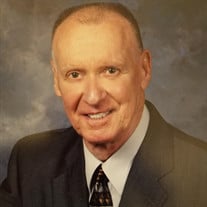 SAM O. SHORT, 91, passed away Sunday, October 27, after an extended battle with pneumonia and respiratory disease. He died peacefully at Grandview Hospital in MICU surrounded by family. He was a devoted Christian, husband, father, grandfather, great-grandfather, friend, hero, and inspiration to many. He is preceded in death by his wife of 63 years, Barbara Short, his mother and step-father Lessie and J.D. Short, and his brothers Bobby and Billy Short. He leaves behind 3 sons: David (Nancy) Short, Larry (Susan) Short, and Rex Short; 5 grandchildren: Andy (Susan) Short, Allison (Scott) Mann, Paige and Samuel Short, and Laura Whitaker; 4 great-grandchildren: Riley and Emory Mann; Sandlin and Griffin Short; and special friend Anne Langner. Sam’s accomplishments are many. He was a three sport star (football, basketball, track) at West End High School. He went on to play football at Western Kentucky. He spent 19 years as a high school football coach and over 50 years as a football and basketball official at the high school and college level. His final job was with the Alabama High School Athletic Association as the supervisor of officials. He served multiple terms on the rules committee of the National Federation of State High School Associations. He has been inducted into the Alabama High School Athletic Association Hall of Fame, the National Federation of State High School Associations Sports Hall of Fame, and the Alabama Sports Hall of Fame, all as an official. He is also in the Vestavia Hills Sports Hall of Fame. He played a major role in creating the first officiating camps in the nation on a high school level and was instrumental at the outset of desegregation in bringing white and black officials together to work racially mixed games. He served as an elder for the Belview Heights/Pine Lane church of Christ for over 25 years and was most recently a member of the Gardendale church of Christ. Visitation will be Friday, November 1, 2019 from 11:00 a.m until 1:00 p.m. with the funeral service to follow at 1:00 p.m. at The New Gardendale Funeral Home. Burial will be at Oakwood Memorial Gardens.

SAM O. SHORT, 91, passed away Sunday, October 27, after an extended battle with pneumonia and respiratory disease. He died peacefully at Grandview Hospital in MICU surrounded by family. He was a devoted Christian, husband, father, grandfather,... View Obituary & Service Information

The family of Sam O. Short created this Life Tributes page to make it easy to share your memories.

Send flowers to the Short family.