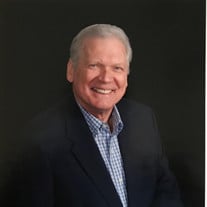 Robert Leon McClendon passed away peacefully at home, surrounded by family, on January 1, 2021, at the age of 76 years. He was born on February 7, 1944. Robert was preceded in death by his parents Ernest McClendon and Imogene Baker McClendon and siblings, brother, Maxie McClendon, and sisters, Glenda McClendon (Ray) Nail, and Carolyn McClendon (Rayburn) Vandiver. Robert is survived by his loving wife of 56 years Linda Hinkle McClendon and his children, son Robert Leon McClendon Jr (Allison) and daughter Lori McClendon Burrow. Sister Melissa (McClendon) Roseberry. Grandchildren Trevor Burrow, Ethan Burrow, Andrew Burrow, and Riley McClendon. Also a host of in-laws, cousin, nieces, nephews, and other family and friends. He filled many sales jobs throughout his early career, but most notably was his work with Rockwell International (Sensus) from 1983 through 2006. In 1983 he was the winner of the first annual “Rocky” award designating him as the top Rockwell water meter salesman in the nation. In 2006 he took early retirement for health reasons. In 2008 he was blessed with a lung transplant that afforded him twelve wonderful years, giving him the opportunity to experience his grandchildren growing up. We are truly blessed for this time and a special prayer goes out to the organ donor family and UAB transplant team who made those years possible. He loved being in the outdoors with friends and family enjoying golf, traveling, camping, hiking, cycling, gardening, and watching his grandkids play sports. His lake house, which he provided as a place of fellowship for his family and friends, was his “happy place”. His warmth, humor, and kind heart will be missed very much by all who knew and loved him. In Lieu of flowers, the family requests donations to Legacy of Hope https://legacyofhope.org/family-services/memorials-and-tributes/ Or, New Prospect Baptist Church, 5835 County Road 38, Cullman, AL 35057

Robert Leon McClendon passed away peacefully at home, surrounded by family, on January 1, 2021, at the age of 76 years. He was born on February 7, 1944. Robert was preceded in death by his parents Ernest McClendon and Imogene Baker McClendon... View Obituary & Service Information

The family of Robert Leon McClendon created this Life Tributes page to make it easy to share your memories.

Send flowers to the McClendon family.