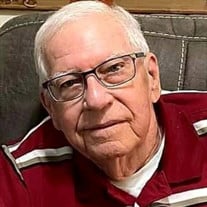 Ray Davis, 82, of Mt. Olive Alabama went home to be with his Lord and Savior Jesus Christ on January 8, 2022. He was a devoted and loving husband, father, grandfather, great grandfather, brother and friend. He served in the United States Army. He was employed with AMERICAN Cast Iron Pipe Company (ACIPCO) as Chief of Plant Security and retired after 36 years of service. Ray was a great man of faith and had a great sense of humor. He enjoyed serving in church and loved his Lord and Savior Jesus Christ. He loved spending time fishing, playing golf, tending to his garden, woodworking but most importantly spending time with his family. He also loved Alabama football. He was a great leader and spent many years coaching community football teaching young boys not just how to be successful on the football field but in life too, but that natural born leadership influenced many during his employment as well. Many of his former football players and employees have remained in contact with him throughout the years. Ray was preceded in death by his parents, Earmon and Bonnie Davis, brother Charles Davis, daughter Tracy Davis, mother and father-in-law Wallace and Olivia Sewell, sister-in-law Helen Sewell and brother-in-law John Sewell. Survivors include his loving wife of 63 years Jackie Davis, daughters Sheila Hill (Chris), Sonya Glasscock, grandchildren Tiffany Lamar (David), Blake Glasscock (Niya) , great grandchildren Joshua and Joseph Lamar, Brother Dan (Dana) Davis, nieces and nephews as well as a host of family and friends. Funeral services will be held at Gardendale Heritage Funeral Home with visitation Wednesday, January 12, 2022 from 5pm – 7pm and Funeral Thursday, January 13, 2022 at 11am. Following the funeral, the graveside will be held at Crestview Memorial Gardens in Adamsville, Alabama. Pastors Eddie Williamson and Larry Craig and Steve Hallmark will officiate. Pall bearers are Blake Glasscock, Marty Rios, Scott Davis, Mike Whaley, James Cagle and Greg Fox. Honorary pall bearer is Calvin Bullock. The family would like to express their appreciation to Dr. Harvey, Dr. Garner, Dr. Alford their staff and all staff of St. Vincent’s hospital who took exceptional care of Ray and truly showed the love of Christ. In lieu of flowers, you can make a donation to the Big Oak Ranch in his memory.

Ray Davis, 82, of Mt. Olive Alabama went home to be with his Lord and Savior Jesus Christ on January 8, 2022. He was a devoted and loving husband, father, grandfather, great grandfather, brother and friend. He served in the United States... View Obituary & Service Information

The family of Ray Davis created this Life Tributes page to make it easy to share your memories.

Send flowers to the Davis family.