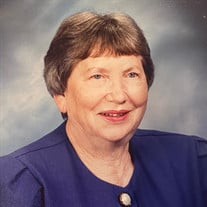 Nellie H. Sweeney went to be with the Lord on Wednesday, April 29, 2020 at age 93. She is survived by her daughter, Peggye (Jim) Dunn; three grandchildren, Jonathan Adam (Sarah) Dunn, James Andrew (Jessica) Dunn, and Calli Michelle Sweeney; one great grandson, K. J. Adell; three nieces, Lucy Murchison, Kitty Case, and Judy Hall; two nephews, Louis Springer and David Keever; and other extended family and friends. Nellie was preceded in death by her husband of 66 years, Robert L. Sweeney; her son, Donald Wayne Sweeney; two sisters, Lucille Springer and Connie Keever; and one brother, Everett Hobbs. She was born and grew up in Culleoka, TN. After WWII she married the love of her life, Robert. They moved to Birmingham in the 1950’s. They were members of Fultondale United Methodist Church. Nellie retired from BEBCO after many years of service as credit manager. After retirement, she and Robert enjoyed trips to his Naval ship reunions, trips to the beach with children and grandchildren, reading, gardening, Tennessee football and women’s basketball, and Holiday family dinners. She will be missed by her family. After a private family service, Nellie will be laid to rest at Jefferson Memorial Gardens. In lieu of flowers, the family requests donations be made to Fultondale United Methodist Church in memory of Nellie.

The family of Nellie H. Sweeney created this Life Tributes page to make it easy to share your memories.

Nellie H. Sweeney went to be with the Lord on Wednesday, April...

Send flowers to the Sweeney family.