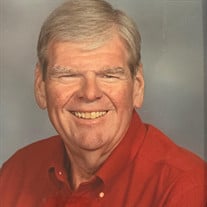 Max Henry "Mac Mac" McGill, Jr., age 69, of Mt. Olive, AL went to be with the Lord on March 3, 2019. He was born October 8, 1949 in Birmingham, Alabama. He attended Jackson Elementary and West End High School. He attended Berney Points Baptist Church. He retired from Butler Manufacturing Company after 32 years of service. He was an active member of Mt. Olive First Baptist Church for 30 years where he served as a deacon. He also served as a leader in many different activities in the Mt. Olive community. He was a member of the Alabama Racing Pioneers and was an avid outdoorsman. He especially loved taking his grandchildren on rides on his lawnmower. He was preceded in death by his wife of 30 years, Nancy Robinson McGill; his parents, Max & Logene McGill; sister, Marsha McGill; and brother, Don McGill. He is survived by his wife of 10 years, Susan Ivey McGill; his daughters, Kristen McGill of Mt. Olive and Allison (Blake) Key of Hayden; three grandchildren, Noah & Kynslee Carroll and Logan Key; brother, Charley (Cindy) McGill of Birmingham, AL; nieces, Stacy (Jeff) Tarrant and Amy McGill; and nephews, Jeff (Laura) Price and Andy (Heather) Price. He also loved his aunts, cousins, stepchildren, and numerous close friends. Max was a wonderful father, grandfather, husband and friend to so many. He will be greatly missed by all. The family will receive visitors at The New Gardendale Funeral Home from 5:00 p.m. until 8:00 p.m. on Tuesday, March 5, 2019. The service will be held at Mt. Olive First Baptist Church on March 6, 2019 at 2:00 p.m. with burial to follow at Mt. Olive Cemetery.

The family of Max Henry "Mac Mac" McGill Jr. created this Life Tributes page to make it easy to share your memories.

Send flowers to the McGill family.