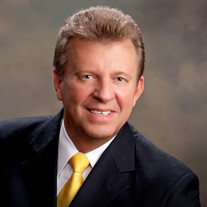 Martin Wayne Lewis, 60, passed away on April 8, 2019 in Orlando, Florida. He was surrounded by his wife, Peggy Jo; 4 children; and 2 grandchildren, after he courageously faced a series of increasingly difficult health challenges over the last 15 years. Martin was born to Luman Doyle (Bill) and Madeline Lewis in San Antonio, Texas on May 1, 1958. Marty, as he was known in those days, was selected for the All-State band; playing Saxophone at Airline High School in Bossier City, Louisiana, where he graduated in 1976. He continued to play in the University band while attending Brigham Young University, where he graduated with a Bachelor of Science in Humanities. He was an avid BYU athletics fan, and he maintained active involvement in the band related activities of his children at American Fork High School in Utah. Martin served in the Padova, Italy mission for the Church of Jesus Christ of Latter-Day Saints from 1977 – 1979, and valued his membership and service in the church throughout his life. In 1990, Martin married Peggy Jo Smith. They were later sealed in the Dallas, Texas LDS temple, and together they had four children: Savannah, Cameron, Regan and Shelby. Martin had a distinguished publishing career, having worked for Holt, Rinehart and Winston and Southwestern College Publishing. In 1997, the family moved to American Fork, Utah. As publisher and managing director of Utah Business Magazine, Martin enjoyed great success; turning the magazine into a thriving, contributing, and profitable venture. He went on to work as publisher and general manager of leading business publications in Washington, DC and Orlando, Florida, prior to illness forcing his early retirement. Martin is survived by his devoted wife, Peggy Jo; son, Cameron (and grandson Cohen); daughters, Savannah (and grandson Liam), Regan & Tim Scherer, and Shelby; his mother, Madeline Lewis; as well as siblings, G. Franklin (and Christie) Lewis; Brenda (and Ed) Bichon; Janie (and Randal) Shumway, and Brad (and Alair) Lewis. He was preceded in death by his father, Luman Doyle Lewis, and his beloved grandson, Ledger Lewis. A private burial service will take place at the Oakwood Memorial Gardens in Gardendale, Alabama, with arrangements being handled by Gardendale Funeral Home. A memorial service in Utah will be announced once final arrangements have been made.

Martin Wayne Lewis, 60, passed away on April 8, 2019 in Orlando, Florida. He was surrounded by his wife, Peggy Jo; 4 children; and 2 grandchildren, after he courageously faced a series of increasingly difficult health challenges over the last... View Obituary & Service Information

The family of Martin Wayne Lewis created this Life Tributes page to make it easy to share your memories.

Send flowers to the Lewis family.