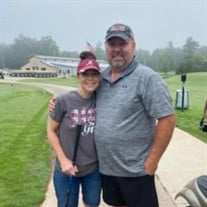 Buzz Yeager (Kenneth Richard Yeager), age 55, of Kimberly Alabama passed away on July 2nd, 2021. He was born June 20th, 1966 at Caraway Hospital in Birmingham. He is survived by his wife of 29 years, Selina Cagle Yeager. He leaves behind a son, Hayden Andrew Yeager (wife Mercedes), and a grandson, Owen Andrew Yeager. He is also survived by his mother Evelyn Balance, sister Kim Yeager Hughes (husband Jason), and brother Rickey Marsh. He is preceded in death by his father Richard “Dick” Yeager, sister Regina Yeager, grandparents Margaret & Ted Yeager, and Fred & Virgil Marsh. He also leaves behind many dear family and friends too numerous to mention. He was a member of Mt. Zion Baptist Church in Corner. Buzz grew up and lived most of his life in Kimberly. Growing up, he loved playing baseball and football. He graduated from Mortimer Jordan High School in 1984. He attended Wallace State College on a baseball scholarship where he was a pitcher. He coached boys’ baseball and football in Morris his early years, and later was an umpire for girls’ softball. For many years he worked for UPS, and then joined his friend Zack Morton as a painter. He is well known for being a great deer hunter and fisherman, but most recently took up playing golf. Buzz loved to teach kids about the outdoors and to respect and love nature. For those who knew Buzz, they knew a friend. He was a person who never met a stranger. He always talked to and treated everyone with kindness and cheer. He loved to joke and make you feel at home when you were with him. He would stop to help anyone and would always leave you with a smile. He always looked at the best in everyone and made sure they knew that he loved them so much. He was jokingly called “the mayor” because he was such a social person and felt so strongly about his family and community. He is leaving a legacy of love, kindness and generosity. Visitation will be held on Tuesday July 6th from 5pm-7pm at Gardendale Heritage Funeral Home. The funeral will be held on Wednesday July 7 th at 11am at Heritage Funeral Home. Brother Andy Heis will be conducting services. Following the funeral, he will be laid to rest at Oakwood Memorial Gardens in Gardendale.

Buzz Yeager (Kenneth Richard Yeager), age 55, of Kimberly Alabama passed away on July 2nd, 2021. He was born June 20th, 1966 at Caraway Hospital in Birmingham. He is survived by his wife of 29 years, Selina Cagle Yeager. He leaves behind a... View Obituary & Service Information

The family of Kenneth "Buzz" Yeager created this Life Tributes page to make it easy to share your memories.

Send flowers to the Yeager family.