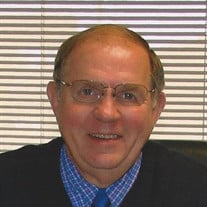 Kenneth “Kenny” A. Clemons of Gardendale, Alabama passed away at home on Thursday, September 13, 2018, following a long battle with a rare disease. Kenny was born March 23, 1940 in Birmingham, AL. Kenny was raised in North Birmingham and graduated from John Herbert Phillips High School. After high school, Kenny graduated from Auburn University. Called to be a coach and teacher, Kenny worked for the Birmingham City School system where he embarked on a long career in education serving as both teacher and administrator. His impact on the lives of both students and staff will be felt for generations. After over 30 years in education, Kenny dedicated himself to serving the people of his community. He served on the City Council of Gardendale from 1972 until 1996 when he was elected mayor. He served the city he loved as mayor for three terms before stepping down to accept the position as Executive Director of the Jefferson County Mayors Association. Kenny served on many boards and organizations in Jefferson County and the State of Alabama, including the Birmingham Jefferson Civic Center, the Metropolitan Planning Organization and the Regional Planning Commission. Kenny met his wife of 57 years, Rhonda Sinyard Clemons while on a family trip to her family’s fishing retreat on the Alabama Gulf Coast. After returning home, he told his friends that he was going to marry that “little blond-haired girl”. They raised their family in Gardendale and attended Gardendale-Mt. Vernon UMC, where he was a lifelong member. He is proceeded in death by his parents, Bert and Lorene Clemons, his daughter, Kerrie Lynn Clemons, and Great-Grandson, Brooks Smith. Kenny is survived by his wife, Rhonda Clemons, son, Barry Clemons and his wife Lisa. Daughter, Connie Smith and her husband Tim. Grandchildren, Brian Smith (Ashley), Kayla Clemons, Sarah Hallmark (Jonny), Cory Smith (Samantha), and Jeremy Clemons. Great-Grand Children, Kaylee Smith, Brodie Smith, Kennedy Smith, Brayden Smith, and Brynleigh Smith, Sister, Kathleen Randle (George), and Brother, Bill Clemons (Donna), Numerous nieces and nephews. Special family friend, Darlene Hammett. The family would like to acknowledge the dedication of Kenny’s health care providers at UAB, Dr. Lisle Nabell, her nurse Nancy Holmes, and the staff of the UAB Infusion Clinic. Dr. Arka Chatterjee, UAB Cardiology. In lieu of flowers, the family ask that memorials be made to the Kerrie Clemons Memorial Fund at Gardendale-Mt. Vernon United Methodist Church, 805 Crest Drive, Gardendale, AL 35071. Visitation will be Monday, September 17, 2018 from 11:00 a.m. until 1:00 p.m. at Gardendale-Mt. Vernon United Methodist Church with the funeral to follow at 1:00 p.m. Burial will be at Oakwood Memorial Gardens.

Kenneth &#8220;Kenny&#8221; A. Clemons of Gardendale, Alabama passed away at home on Thursday, September 13, 2018, following a long battle with a rare disease. Kenny was born March 23, 1940 in Birmingham, AL. Kenny was raised in North Birmingham... View Obituary & Service Information

The family of Kenneth “Kenny” A. Clemons created this Life Tributes page to make it easy to share your memories.

Kenneth “Kenny” A. Clemons of Gardendale, Alabama passed away...

Send flowers to the Clemons family.