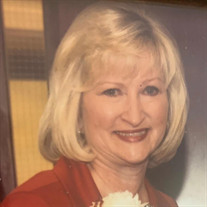 Joann Smith Wissinger, born October 4, 1954, passed away on Sunday, April 18, 2021. Joann grew up in the Akron/Stewart community in Hale County, Alabama, but spent her most recent adult life in Leeds, Alabama. Graduated from Southern Academy High School in 1973, The University of Alabama in 1977 and then received her Masters from The University of Alabama in 1984. Joann married the love of her life, Marty Wissinger on August 21, 1993 and was a devoted and loving wife to Marty for 28 years. Joann loved her Lord and her many church friends. She was a member of Trinity United Methodist in Homewood, Alabama. She was devoted to her family. Joann was loved by all members because of her kind and gentle ways. Her friends were many. She adored these friendships and kept in touch with all of them. Joann enjoyed holidays and activities where she was able to interact with all people special to her. She also loved to cook for these events. She delighted in attempting new recipes starting as a child with her mother into adulthood. There were always special treats to share if guests dropped by. Joann was dedicated to her work responsibilities. Her work product was always organized and complete. Joann began her career with the Alabama Cooperative Extension Service in 1978 in Jefferson County as one of the 4-H Agents for the county. In 2004 she became a Regional 4-H Agent based in Jefferson County. In 2010 she accepted the position as the Jefferson County Extension Coordinator where she worked until her retirement in 2015. Her 37-year career was all spent in Jefferson County always putting 4-H in the spotlight. Through her work with Extension, she developed great relationships at Auburn University. She was an animal lover. Joann usually had a special cat for a pet. Her pets were a part of the family and were treated like “kings.” The University of Alabama football was a passion. She was a dedicated fan and attended many games with Marty and friends. Joann was a member of The University of Alabama’s National Alumni Association and Tide Pride. Joann Wissinger will be missed by so many people, but she is at peace now with her Lord. As we remember the days and years we had with her, we stop to wipe away our tears. They are not tears of sadness because we know she is in a better place. They are tears of thankfulness for the precious and sweet memories that she created for us. Joann, with her loving ways, will always be close in our hearts. She was preceded in death by her parents, Billy and Annie Ruth Smith. Survivors include her loving husband, L. Martin (Marty) Wissinger; step daughter, Emily W. (Matthew) Nabors; Grandchildren, Dallas Nabors, Hamp Nabors and Hunter Nabors; One sister, Ginger Smith (Walter) Ramey; Niece, Casey A. Ramey; Nephew, Chad E. (Heidi) Ramey; Grand Nieces: Anna Elizabeth Ramey and Emma Claire Ramey and a host of other family and friends. Visitation will be held at Gardendale Heritage Funeral Home on Saturday, April 24th beginning at 12PM with Chapel Services at 2PM and burial to follow in Liberty Minter Cemetery in Morris AL. In lieu of flowers, the family requests that donations be made to the Alabama 4-H Club Foundation, Inc. 244 Duncan Hall, Auburn University, Alabama 36849 https://alabama4hfoundation.org/

The family of Joann Smith Wissinger created this Life Tributes page to make it easy to share your memories.

Send flowers to the Wissinger family.