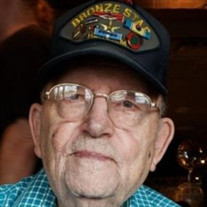 J.C. was born at the family home in Tarrant to Henry and Ethel (Cornelius) Pinyan. During the Great Depression his family lived on his grandparents’ farm in Conn’s Creek, Georgia. The five years spent there instilled in him love of family, strong work ethic and practical knowledge he would use the rest of his life. At age five, J.C. began school at the one-room school at Conn’s Creek. In Alabama, he attended Rockwood, Gardendale, Mortimer Jordan, and graduated from Minor High. J.C. worked at U.S. Steel until Uncle Sam called, then he joined the Army. At the onset of the Korean Conflict, he was transferred to the 11th Field Artillery 24th Division where he saw action in five major battles, was promoted to Staff Sargeant and received the Bronze Star for valor. J.C. retired from U.S. Steel, then worked in construction, and was custodian at Snow Rogers Elem. School. Of the many milestones in his life, most important to him was his decision to accept Christ as Savior. He was ordained a deacon at Mineral Springs Baptist Church and later continued his ministry as a deacon at Beechwood Baptist. J.C. loved his family. He was married to the love of his life, Dora Jim Cupps, for 64 years and they had three daughters. He was a steadfast provider and a supportive husband and father. J.C. loved bluegrass music, University of Alabama sports, his John Deere, a big breakfast, and working with his hands. He was preceded in death by his wife, Dora, parents Henry and Ethel Pinyan, and siblings Martha Templin and Roger Pinyan. He is survived by daughters Sheila McAnnally (Terry), Sherri Pinyan, and Sandra Holmes (Darren); grandchildren Devin McAnnally (Brittani), Jordan Holmes, Jacob Holmes (Anna), and Jeb Holmes; great-grandchildren Mary, Claire and Sarah McAnnally; siblings Mary Salter and William “Bud” Pinyan (Dianne). Also surviving him are many nieces, nephews, extended family and friends. A celebration of life will be held at 11 a.m. Thursday, December 3, at Gardendale Heritage Funeral Home, with visitation to begin at 10 a.m. The family requests that masks be worn. Weather permitting, a graveside service will be held at Mt. Olive Cemetery. In lieu of flowers, memorial donations may be made to the Gary Sinise Foundation, which supports our service members, veterans and their families.

J.C. was born at the family home in Tarrant to Henry and Ethel (Cornelius) Pinyan. During the Great Depression his family lived on his grandparents&#8217; farm in Conn&#8217;s Creek, Georgia. The five years spent there instilled in him love... View Obituary & Service Information

The family of Mr. Jasper C. Pinyan created this Life Tributes page to make it easy to share your memories.

J.C. was born at the family home in Tarrant to Henry and Ethel...

Send flowers to the Pinyan family.