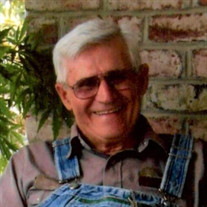 James Leon Davis August 13, 1930 – March 1, 2021 After a long life, James L. Davis, of Blount County, Alabama, died peacefully with a full and grateful heart. Born August 13, 1930 in Newnan, Georgia, the youngest of Drucilla Warren and James Leon Davis’ ten children. His father died January 1, 1930 so Dru was mother and father holding the family together with tenacious love. Although he never had a father, Jay became a wonderful father to his children and a father figure to many. He had a huge heart. In 1948 he graduated Bowden High School where he played every sport available. He loved baseball and played catcher on several teams beyond high school level. Usually the youngest player, the kid owned home plate and was unafraid to upend grown men with a block and tag. He passed the love of sports to his sons and coached youth baseball, basketball, and football. He believed boys needed good equipment, good food, and lots of practice. Many West End boys received all three. Jay joined the Navy after high school to see the world. Instead, he saw Whidbey Island, Washington where he learned aircraft mechanics. He considered a military career until he met Jean Grafton during a Birmingham stay. They welcomed three children in three years and were three weeks shy of 63 years of marriage when parted by her death in 2016. Jay worked as an aircraft mechanic with Hayes Aircraft prior to his employment with US Steel where he retired as a heavy equipment mechanic. He was a Baptist but felt religious beliefs were personal. He loved the underdog unless they were referees in an Alabama game. Jean and Jay moved to Blount County in 1977, embraced the country life with huge gardens Spring and Fall. He loved giving produce to everyone from his doctor to the auto parts clerk. He built their handcrafted country home to his exacting specifications. He was mechanic on call for family, friends, and neighbors. Never one to delegate, he was the hardest worker many knew. He never met a stranger. His disarming smile lit the room. He was loud and quick witted, generous and loyal, a trickster and a yarn spinner. He loved his family fiercely and friends became family in short order. Some of his best friends were his brother and sisters and in-laws. He especially loved the family Thanksgiving reunion known as “The Gathering of the Nuts”. Left to cherish his memory: sister-in-law Jo Adams; daughter Laura Taylor (Mike); son James L. (Jimi) Davis, Jr.; granddaughters Jami Heaton (Jason), Jennifer Glass (Bobby), Caitlin Taylor (Lee Freeman); grandson Jacob Taylor (Cassie); four great-granddaughters, three great-grandsons, and a host of nieces and nephews. He was predeceased by Jean G. Davis, beloved wife; Joseph P. (Joey) Davis, son; sisters Girlilee Thomason, Jimmie McGhee, Willene Styles, Mildred Copeland, Frances Crow, and Wawena Phillips; brother Harold Davis, Warren G. Davis; and infant brother and parents. A celebration of his life will be held at 11:00 am on Saturday March 6, 2021 from the chapel at Gardendale Heritage Funeral Home located at 2214 Decatur Hwy Gardendale, Al. 35071 with burial to follow at Sulphur Springs Cemetery. In lieu of flowers, please consider a memorial gift to an organization that feeds the hungry or supports local farmers.

The family of Mr. James Leon Davis created this Life Tributes page to make it easy to share your memories.

Send flowers to the Davis family.