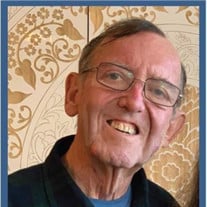 James (Jim) Lee Branum, 68, of Gardendale, AL went home to be with the Lord on January 27, 2022, after a courageous battle with cancer. He is survived by his loving wife of 43 years, Nell Carter Branum; two sons, Timothy James Branum (Amanda) of Lincoln, Nebraska, and Daniel Thomas Branum (Stephanie) of Morris, Alabama; and a daughter Sarah Elizabeth Branum Law (Jordan) of Morris, Alabama. He was beloved “Pop” to nine grandchildren: Maddie Branum, Emma Kate Branum, Lottie Branum, Parker Branum, Conner Branum, Gwenie Branum, Ellie Law, David Law, and Joshua Law. Jim was born in Ft. Worth, Texas on February 2, 1953, to Ralph Edward and Coleen Shannon Branum. He graduated from Samford University with a major in Music Education, and also received the Master of Divinity and Master of Music degrees from Southwestern Baptist Theological Seminary in Ft. Worth. He was in his 50th year of serving Southern Baptist churches, spanning from Florida to Alabama to Texas to California. During his ministry, he pastored two churches and served other churches in the areas of music, youth, education, church planting, and community ministries. He especially loved leading congregational worship and choirs for all ages, including handbell choirs. Jim served for the past twelve years as Minister of Music at Mulga Baptist Church in the Birmingham area. He previously served for twelve years as Minister of Music and Education at Fultondale (AL) First Baptist Church. He also served on the staff of what was then called the Birmingham Baptist Association, working with the Center at Central Park and other ministries. He was the founder and Executive Director of the non-profit ministry called CareNet Connection, working with Christian Women’s Job Corps and other initiatives, and he started the Remedy medical equipment loan ministry with the Birmingham Metro Baptist Association. For the past several years, he worked bivocationally, both as a minister and as a truck driver for Dunn Construction. Visitation will be Tuesday, February 1, 5:00 – 7:00 p.m. at Gardendale Heritage Funeral Home. A memorial service will be held at 10:00 a.m. on Wednesday, February 2 at Fultondale First Baptist Church. In lieu of flowers, memorial donations may be made out to “Samford University Division of Music in memory of Jim Branum,” to be included in a scholarship fund being established in Jim’s name. Please use that wording, and send to Samford University, 800 Lakeshore Drive, Birmingham, AL 35229.

James (Jim) Lee Branum, 68, of Gardendale, AL went home to be with the Lord on January 27, 2022, after a courageous battle with cancer. He is survived by his loving wife of 43 years, Nell Carter Branum; two sons, Timothy James Branum (Amanda)... View Obituary & Service Information

The family of James (Jim) Branum created this Life Tributes page to make it easy to share your memories.

Send flowers to the Branum family.