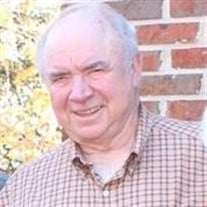 James Foster Bedsole, age 79, entered the promise of his “living hope through the resurrection of Jesus Christ from the dead” (1 Peter 1:3) on the morning of Monday, October 21, 2019. Originally born in the seat of the family homestead in Hacoda, Alabama to Dalton and Mabel (Oliver) Bedsole, Foster grew up in the Eastlake area of Birmingham alongside his three brothers; older brother Dr. Donald (Cindy) Bedsole, and younger brothers Dr. Anthony (Kay) Bedsole and Travis (Joyce) Bedsole. After graduating from Woodlawn High School, Foster briefly attended college and then left to serve four years in the United States Navy onboard an aircraft carrier, the USS Kearsarge, stationed in the port of Los Angeles, California. Upon leaving the Navy, he was married on September 20, 1963 to his high school sweetheart, Janice Elaine Knight. After receiving his Electrical Engineering degree from the University of Alabama in Tuscaloosa, he pursued a career as a project manager in the design and construction of pulp and paper mills. In his later years, he retired to Cullman, Alabama and more recently moved to nearby Gardendale. Foster is survived by his beloved wife Janice, his eldest daughter Andrea Bedsole Mullins, youngest daughter Tracy Bedsole Bennett, and his son-in-law Michael Wade Bennett. He was the proud grandfather of four grandsons: Jake Knight Mullins, Luke Dalton Mullins, Samuel Parish Bennett, and Noah Foster Bennett. He also leaves behind his two younger brothers, all three brothers’ wives, a host of nieces and nephews, and several sister- and brother-in-laws on the Knight side of the family: Harley Joe (Kazuko) Knight, Teresa (Bill) Bowden, and Cathy (Bennett) Tucker. He will be greatly missed and tenderly remembered by all. A visitation will be held, 11:00 a.m. - 12:00 p.m., prior to the service on Saturday, October 26, 2019 at noon in The New Gardendale Funeral Home in Gardendale, Alabama. Burial will follow in the “Garden of Love” at Jefferson Memorial Gardens in Trussville. But know that his soul rests “in the Garden” with His Savior. In lieu of flowers, memorials may be made to the nationwide Christian charity, Samaritan’s Purse (www.samaritanspurse.org), or to the Gideons (www.gideons.org).

James Foster Bedsole, age 79, entered the promise of his &#8220;living hope through the resurrection of Jesus Christ from the dead&#8221; (1 Peter 1:3) on the morning of Monday, October 21, 2019. Originally born in the seat of the family homestead... View Obituary & Service Information

The family of James Foster Bedsole created this Life Tributes page to make it easy to share your memories.

James Foster Bedsole, age 79, entered the promise of his “living...

Send flowers to the Bedsole family.