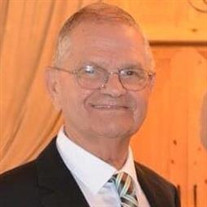 Jackie (Jack) Donaldson, aged 80, of Gardendale, Alabama passed peacefully on February 9, 2019. Born on May 10, 1938 in Birmingham, Jack grew up in Bayview and graduated from West End High School in 1958. After serving a tour with the Army, Jack began a long and widely respected career in the trucking industry working his way up from the shop to managing safety for Malone Freight Lines (later acquired by CRST) for over 30 years and finally ending his career with Boyd Brothers before retiring in 2011. To Jack, retirement meant he only worked three days a week as he continued to serve the Boyd Brothers safety department as recently as three weeks ago. Jack will be fondly remembered by many for his caring nature and by the work ethic that he exhibited in everything he did. Fondly referred to as “The Energizer Bunny” at the office due to his constant motion and unending drive, there are many people who benefited from Jack’s willingness to always lend a hand. Jack is survived by his wife of 56 years, Pat (Wood) Donaldson. Pat and Jack were married on August 31, 1962 and spent most of their lives living in Pleasant Grove. After surviving the 2011 tornado Super Outbreak, when their home was destroyed but not their loving spirit, they relocated to Gardendale. Jack was the proud father of Darryl (Tricia) and Dave (Kate) Donaldson who provided him with the joys of his life: granddaughters Lauren Donaldson and Kaitlyn (TD) Camp and grandsons Jake and Zack Ingram. He also loved his many nieces, nephews, cousins and virtually every child that was blessed to meet him. He is also survived by his siblings Don (Sonja), Betty (George) McDonald and Francis Messina. He was preceded in death by his parents as well as the people who raised him and saved his life, Mildred (Aunt Sis) and Herman Woodall. Visitation will be held on Tuesday, February 12 from 6pm to 8pm at The New Gardendale Funeral Home. Funeral services will be held at the same location the following day at 11am with burial to follow at Elmwood Cemetery. In lieu of flowers, the family asks that charitable donations be made to St. Jude’s Children’s Research Hospital that supports and cares for all children...just as Jack did.

Jackie (Jack) Donaldson, aged 80, of Gardendale, Alabama passed peacefully on February 9, 2019. Born on May 10, 1938 in Birmingham, Jack grew up in Bayview and graduated from West End High School in 1958. After serving a tour with the Army,... View Obituary & Service Information

The family of Jackie “Jack” Donaldson created this Life Tributes page to make it easy to share your memories.

Send flowers to the Donaldson family.