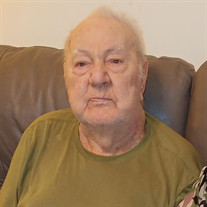 George Raymond Adams passed away on Tuesday, December 31, 2019 at age 91. He is survived by his loving wife of 72 years, Lorene Adams; three children, Peggy Adams England, Billy (Debbie) Adams, and Dennis Adams; four grandchildren, Tahara (Hal) Wood, Christopher Ray Adams, Christy Marie Adams, and Brittany Nicole Adams; nine great grandchildren, Anthony Evans, Will Evans, Maggie Evans, Sheyenne Adams, Cansas Williams, Cloey Williams, Jim Williams, Brooklyn Booth, and Gavin Booth; two sisters, Nellie Chastain and Annie Earl; and a host of nieces, nephews and other extended family. Raymond was preceded in death by his parents, Iva and Eula Adams; two brothers, Paul and Frazier Adams; and sister, Alma Jane McConnell. He was a wonderful husband and father whose family was the most important thing to him. He will be missed so much by his family. He retired from Ryder Trucklines after 37 years of service. Visitation will be Sunday, January 5, 2020 from 11:00 a.m. until 12:00 p.m. at The New Gardendale Funeral Home with the funeral to follow at 12:00 p.m. Burial will be at Valley Hill Memorial Gardens in Pell City, AL.

The family of George Raymond Adams created this Life Tributes page to make it easy to share your memories.

Send flowers to the Adams family.