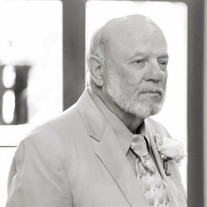 “Don’t talk too much or too soon.” – Bear Bryant Surrounded by loved ones, Clifford “Paw Paw” Morris, 83, passed away peacefully at his home in Pleasant Grove, AL on the morning of February 1, 2021. Clifford Morris was born on June 6, 1937 to father Willie J Morris and mother Minnie Ree Morris in Weogufka, AL. He grew up in a loving family, with three sisters and one brother, and was a loving father to four children of his own. Clifford was a man of few words, but a man of much love. He found a way to say what he needed to say when it mattered the most, and always showed up for his friends and family. He was an avid Bear Bryant and University of Alabama football fan, and proudly collected and displayed Alabama memorabilia from the past 70 years. He was able to enjoy his final Alabama game with his son and see the school bring home one more National Championship. Before retiring, Clifford worked as a truck driver for Hall Systems for over 50 years, traveling all over the U.S. He memorized almost every highway in the country, and always knew exactly where his children and grandchildren were during their travels – down to the route they should take. He was always up for a road trip and treasured the tradition of spontaneously driving across state to get lottery tickets with his best friend Leon. Clifford will be lovingly remembered by the mother of his children (Jean Poe) and his children, Tammy Henderson (Donnie), Gary Morris (Donna), Lyn Isbell and April Trent (Richard). He will also be remembered by his 7 grandchildren, Tiffany Henderson, Nicholas Harrison, Meghan Blackburn, Stephanie Harrison, Ariel Williams, Krista Frost, and Ashley Brown, by his 4 great grandchildren Peyton Henderson, Grey Blackburn, Castiel and Clifford Morris, and by his sisters, Tonie Forbus and Glenda Littleton. Clifford was predeceased by his parents, Willie J and Minnie Morris, by his brother Junior Morris, and by his sister, Jewell Roberson. A Celebration of Life will be held by the family in honor of Clifford Morris in the coming weeks. In lieu of flowers, please consider a donation in Clifford’s name to The American Cancer Society.

The family of Clifford Morris created this Life Tributes page to make it easy to share your memories.

“Don’t talk too much or too soon.” – Bear Bryant

Send flowers to the Morris family.