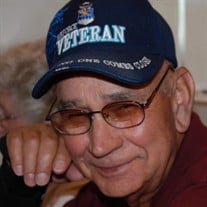 Christopher Jesse Hughes, age 85, passed away peacefully on Sunday, February 28, 2021 surrounded by his children. Chris was born February 4, 1936. He is preceded in death by his loving wife of 63 years, Billie Ruth Hughes; his parents, K.C. and Lucille Hughes and his great granddaughter, Layla Hughes. Chris is survived by his children Sandi and Wayne Mantooth, Christi Owen, K.C. Hughes, Billy and Ginny Hughes, Rhonda and Dale DeLoach and Steve Hill; his grandchildren, Stacey (Steven) Moro, Halie (Mickey) Conn, Sean (Alison) Owen, Chris (Keri) Owen, Kasey (Kristen) Owen, Ben (Kylie) DeLoach, Brittany (Russell) Hill, Emily (Adam) Hill, Lauren (Dalton) Moore, Alec (Halleigh) Williams, Denise Kelso, Lance (Nicole) Hughes, Warren (Pennie) Hughes and 24 great grandchildren. He is also survived by his brother, Kip C. Hughes. Chris was the embodiment of what a father and grandfather should be. He was deeply devoted to everything he was a part of. He was proud to serve his country, humbled to lead his family and committed to loving others. He faithfully served his country for 37 years both domestically and abroad. He was a member of Central Baptist Church where he served as a deacon. His top priority in life was to ensure his entire family had the opportunity to develop their own personal relationship with the Lord and that they were actively involved in their church and community. Chris loved family gatherings and spending time with his grandchildren. He also loved family vacations that involved as many family members as possible. His door was always open to anyone and he freely gave advice, whether asked for or not. His legacy is his family and their faith in God. Visitation will be held on Wednesday, March 3, 2021 from 5pm to 7pm at Gardendale Heritage Funeral Home. The funeral service will be Thursday, March 4, 2021 at 11AM in the Chapel at Gardendale Heritage Funeral Home. Interment will follow in Walker Chapel Memorial Gardens. In lieu of flowers, the family requests you consider a donation in Chris’s name to Cornerstone Ranch.

Christopher Jesse Hughes, age 85, passed away peacefully on Sunday, February 28, 2021 surrounded by his children. Chris was born February 4, 1936. He is preceded in death by his loving wife of 63 years, Billie Ruth Hughes; his parents, K.C.... View Obituary & Service Information

The family of Christopher Jesse Hughes created this Life Tributes page to make it easy to share your memories.

Send flowers to the Hughes family.