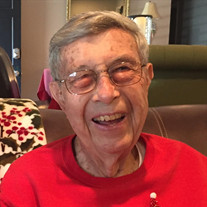 Charles Winston Sherrer of Gardendale, AL died on January 10, 2019. Charles was born in Opelika, Alabama on June 28, 1924 to Charlie Allen and Erin Childers Sherrer. He attended Northside elementary school and graduated from Opelika High School in the class of ‘42. After graduation he attended API (Auburn) before being called into service during World War II. He was assigned to the Army Air Corp and it was during training at Keesler Air Base (Biloxi, MS) that he met his wife to be, Desiree Roberts. During his time in the service he flew 44 bombing missions as a flight engineer on B-24’s of the 307th Bomb Group in the South Pacific during the Philippines Liberation Campaign. After discharge from the service he returned to Opelika and began a career with the United States Postal Service. He worked in various positions at the Opelika office before being elevated to District Director of Finance for the Delta District in Jackson, Mississippi, where he retired after 40 years of service. After retirement he returned to Opelika where he engaged in volunteer work for various organizations, including the City of Opelika Retirement Recruitment Committee, the Achievement Center Board, and The Opelika Historical Society. He was a loyal and faithful member of Trinity United Methodist Church. For many years he and his wife, Desiree, directed the Christmas Clearing House for the Lee County Department of Human Resources. Charles was preceded in death by his parents, a sister Nellie Poynter (Ed) and his son, Robert Sherrer. He is survived by his wife of 72 years, Desiree R. Sherrer; a daughter, Linda Drake (Brad) of Mt. Olive; two grandsons, Steven Sherrer (Nikki) of Carlsbad, California and Allen Johnson (Mary) of Hoover; one beloved granddaughter, Leslie Johnson of Mt. Olive; four great grandchildren, Kyle, Alexa, Ava and Greyson. Charles was a loving husband, father and grandfather. He was a most generous and compassionate man of God with at servant’s heart. He will be greatly missed by his family and friends. A memorial service will be held at The New Gardendale Funeral Home on Friday, January 18, 2019 at 2:00 p.m. with visitation from 1:30 p.m. until 2:00 p.m. A burial service will be held at a later date in his beloved hometown of Opelika, AL. In lieu of flowers, the family requests that remembrances be made to Red Mountain Grace www.redmountaingrace.com, 2120 16th Avenue South, Suite 300R, Birmingham, AL 35205 or Gardendale Mt. Vernon UMC, 805 Crest Drive, Gardendale, AL 35071.

The family of Charles Winston Sherrer created this Life Tributes page to make it easy to share your memories.

Send flowers to the Sherrer family.