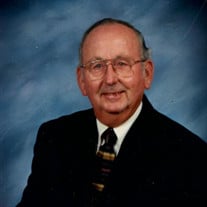 Bobby Ray “Bob” Jenkins, age 91, of Morris, Alabama completed his journey to Heaven on Friday, February 18, 2022 at 6:02 pm. His life was lived fully as he was a child of God and lived accordingly. He was dedicated to his Lord, his family, and his church. Born at home in Sardis, Alabama on December 22, 1930, Bob was the third child of Oscar and Mamie Doss Jenkins. As an Army veteran, Bob served our country in the Korean War for over 2 years. Starting in 1956 as a truck driver, he worked through the ranks as a heavy equipment operator, specializing in operating large bulldozers for Jefferson County Roads and Transportation Department, Ketona Division. After 34 years of service, he retired as Superintendent. Bob was an avid farmer and was involved in cattle raising his entire life. He served as chaplain of Jefferson County Cattleman’s Association. He was a member of Enon Baptist Church from 1945 to the present and served as a deacon, choir member, and Sunday School teacher for many years. He was honored as Deacon Emeritus in 2007. Throughout the church and community, he was lovingly known by all as “Papa Bob”. He was Past Master of Sam Thompson Masonic Lodge and served as secretary of the lodge for over 30 years. He is preceded in death by his father, Oscar Jenkins, his mother, Mamie Doss Jenkins, his sister, Dorothy Jenkins McAllister, and his brother John Jenkins. He leaves the people who loved him most: His wife of 66 years, LaVerne Anderson Jenkins, his brother Ralph Jenkins (Margaret) of Morris, his sons, Eddie Jenkins (Sheila) of Morris, and Paul Jenkins (Paula) of Sardis. Bob has three grandsons, Kyle Jenkins (Katie) of Morris, Grant Jenkins (Lindsey) of Morris, and Miles Jenkins of Durham, North Carolina, and three granddaughters, Bethany Ward (Shane) of Hayden, Anna Farley (Logan) of Cullman, and Deborah Jenkins of Sardis. “Poppy Bob” was the proud great-grandfather to five great-grandchildren: Hillie, Brynn, Eliza, and Leland Jenkins, and Bronson Ward. He also leaves a host of nieces, nephews, cousins, and friends. In lieu of flowers, gifts and donations can be given in memory of Bobby R. Jenkins to the Foster Care Closet at Enon Baptist Church, 724 Morris-Majestic Road, Morris, Alabama, 35116.

The family of Bobby Ray Jenkins created this Life Tributes page to make it easy to share your memories.

Send flowers to the Jenkins family.